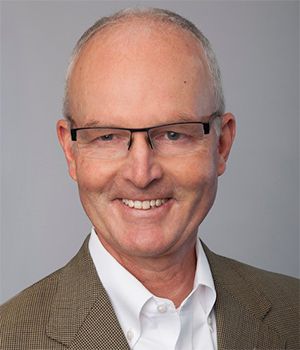 Winstead, who received his bachelor’s and master’s degree from Ohio in 1980 and ‘81, respectively, had previously served as Assistant Athletic Director for Development at his alma mater since July of 2018.

Prior to his return to Athens last year, Winstead spent over 30 years serving in development roles at Georgia Southern, Oregon, Houston, Washington, Colorado State, Louisiana-Lafayette and Seattle as well as with USA Wrestling.

In Winstead’s new role he will also serve as the department's liaison with University Advancement and The Ohio University Foundation.

Winstead has set an aggressive goal for the calendar year of 2019 to increase Ohio Bobcat Club gift totals by 30 percent, achieving this goal through an increased number of annual gifts by Ohio University alumni and friends as well as former student-athletes. 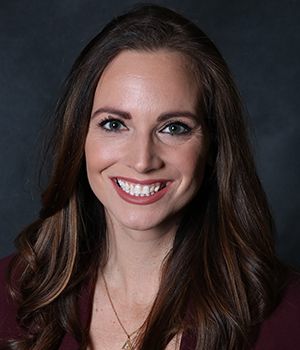 Samantha Godwin was promoted to Assistant Athletics Director for Development for Ohio Athletics on May 30, 2019 after serving as the Associate Director of the Ohio Bobcat Club in 2018-19.

Godwin brings a plethora of fundraising experience from various organizations such as political fundraising and non-profit fundraising with Habitat for Humanity.

During her time as Associate Director of the Ohio Bobcat Club, Godwin oversaw a 16-percent increase to the Annual Fund. She coordinated premium seating and parking, planned donor engagement events, managed OBC membership benefits and ensured efficient processes for all internal functions of the OBC.

As the Director of Community Engagement and Development for Habitat for Humanity of Southeast Ohio, Godwin generated a record breaking $200,000 through special events and successfully funded over six Habitat homes within a two-year span. Before moving to Ohio, Godwin spent three years in political fundraising, serving as a director of development for McKinley for Congress. During her tenure she was responsible for generating over $1.5 million in donations to help a successful re-election campaign in the first district of West Virginia.

Godwin played softball at Florida Gulf Coast where she earned a bachelor's degree in Criminal Justice and Criminal Forensic in 2009. She then went on to earn her master's degree at West Virginia in American Political Science and Government Relations.

Godwin resides in Athens with her husband, Charles, and her two dogs, Tucker and Cooper. She also has served on the board for Friends of Court Appointed Special Advocates (CASA), Circle of the Child Conservation League (CCL), and Athens Professionals for Philanthropy (APP).

Matt Thomson was named Assistant Director of Member Services for the Ohio Bobcat Club and the Arts in June 2020.

Thomson is responsible for the oversight and strategic direction of the Ohio Bobcat Club’s Annual Giving campaigns, including the coordination of premium seating and parking, planning of all donor events, and management of a donor portfolio. He leads the Ohio Bobcat Club’s Annual Giving team, and works closely with the Ohio University Foundation, OHIO Alumni Association and Ohio Athletics Ticket Office staff.

Before joining the team, Thomson served as the Program Manager for the Ohio University CoLab and the Center for Entrepreneurship. In this role he managed a 10,000 square foot student innovation center focusing on enhancing student engagement levels to advance the missions of OHIO. Thomson oversaw all fundraising efforts for CoLab and the Center for Entrepreneurship resulting in over $200,000 in gifts in a 18 month timeframe.

Thomson came to Athens in 2011 to earn his masters in College Student Personnel, and has held various positions across campus since graduating in 2013. Thomson is also a current BOBCAT pursuing his Ph.D. in Instructional Technology aiming at increasing his skills at digital engagement. This almost 2-time Bobcat and his family is proud to call Athens their home. 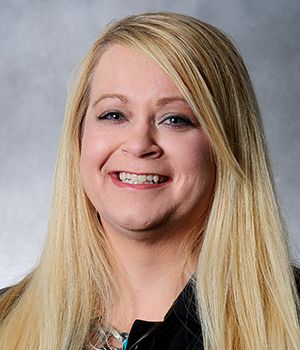 Tricia Perry joined the Ohio Bobcat Club staff in 2008 after 12 years in the Ohio Athletics Ticket office. In her role as administrative support she oversees daily operations and assists OBC staff with annual giving and financial reporting. Tricia is married to Steve Perry. The couple has a daughter Mackenzie. 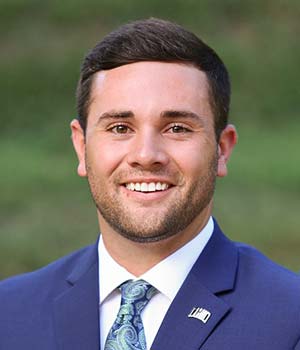 He most recently served as a Development Assistant for Athletics at Ohio University and has worked in several different capacities with the Ohio Bobcat Club (OBC). Blank has been involved with Ohio Athletics since August of 2018 serving as a game operations volunteer, graduate assistant and staff member.

While working with the Ohio Bobcat Club, he has managed a donor portfolio of approximately 130 donors and worked to renew numerous annual donations each year. Also, he has been responsible for the onboarding and management of the Graduate Assistants in the OBC. He has played an integral role in creating a new communication and stewardship plan for the Ohio Bobcat Club that will ultimately fit into the new strategic plan that the OBC will adopt in 2020.

While a Graduate Assistant in 2019, Blank was responsible for planning and running the Hospitality Village, where they saw record attendance and increased involvement across the entire athletics department. He created and put on the first ever Preseason Tip-Off Basketball Event for Ohio Athletics that attracted OHIO’s top-level donors, IMG clientele and basketball premium seat holders. He also oversaw premium seating operations for men’s basketball, led the Semi-Annual Student-Athlete Thank- A-Thon, helped run the OBC social media accounts and worked very closely with the Ohio Bobcat Club Advisory Board.

Prior to arriving in Athens, Blank served as a Development Assistant for Athletics at the University of South Carolina from 2017-2018.  While there, he served as the 200-level Floor Captain for premium areas during home football games, overseeing 20 student employees and stewarding UofSC’s highest- level donors in the Williams-Brice Stadium ($25,000+ annual donations).  Additionally, he helped manage the social media presence of the Gamecock Club, created and distributed over 1,500 gift acknowledgements, and trained and helped manage 10+ student interns for the Gamecock Club.

Prior to his time at UofSC, he served as a Phoenix Club Assistant for the fundraising arm of Elon Athletics. He monitored hospitality events sponsored by the Phoenix Club for home football and basketball games, as well as helped coordinate their annual event, “The Night of the Phoenix,” which raises over $200,000 in one night. 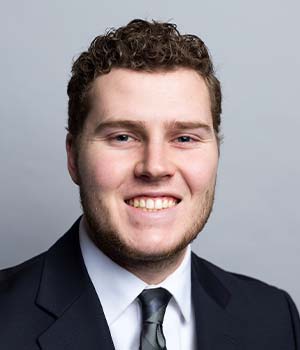 Hunter is pursuing his Master of Sports Administration from Ohio University. He is currently serving as a Graduate Assistant for Annual Giving and is working directly with Member Services of the Ohio Bobcat Club.

Throughout his time at the University of Nebraska, Hunter served as Vice President of the Nebraska Sports, Entertainment, and Business group. He worked closely with faculty, alumni, and other members of the SEB Board to coordinate and organize events such as alumni tailgates, guest speakers, fundraising through apparel sales and group events, and the annual Law School March Madness Tournament Challenge.

In the Summer of 2019, Hunter worked as a Law Clerk at Lane & Waterman, LLP in Davenport, Iowa working on projects ranging from litigation appeals, trusts and estates, education and employment law, and real estate transactions. He continued his legal work in the Fall of 2019 working for the Weibling Entrepreneurship Clinic at the University of Nebraska as a Senior Certified Attorney representing clients on a number of transactional law issues such as entity formation, intellectual property rights, and contract drafting. 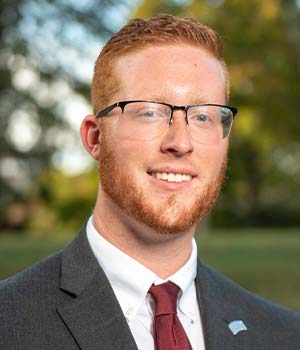 Christian recently received his Master of Business Administration (MBA) from Ohio University. He is currently pursuing his Master of Sports Administration (MSA); he will be graduating in Spring 2021. While earning his MBA, he worked as a Graduate Assistant for the Ralph & Luci Schey Sales Centre at Ohio University while volunteering with the Ohio University athletic department in different capacities. During the year, Christian was selected to attend the NCAA Emerging Leaders Seminar at NCAA headquarters in Indianapolis, Indiana.

Prior to starting his MBA, Christian served as a Development Assistant within the athletic department at the University of South Carolina. During his time with the Gamecock Club, Christian worked closely with major gift offers in prospecting and developing major gift support from former student-athletes. During home football games, he was responsible for being a Floor Captain at the 200 level premium seating areas, managing over 20 student employees, and stewarding UofSC's highest-level donors. Christian also assisted with developing a proposal for the funding of a multimillion-dollar golf course facility.

In 2018, Christian graduated from Virginia Tech with a Bachelor of Science in Business majoring in Marketing Management with minors in Business Leadership and Communications. He was also an intern with the Virginia Tech Athletic Fund where he developed, planned, and executed events for Hokie Club donors, student-athletes, and former athletes in the Monogram Club. Christian was also the president of the Sports Business Club. 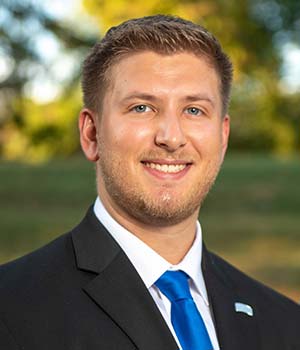 Kyle Bollig was named an Athletics Department Graduate Assistant for the Ohio Bobcat Club in May of 2020.

Bollig came to Athens in August of 2019 as a member of the MBA/MSA dual program in the College of Business. He earned his MBA in June of 2020 and will graduate in May of 2021 with his Masters of Sports Administration. While earning his MBA, Bollig served as the Graduate Assistant for Alumni Engagement in the College of Business and volunteered regularly with the Ohio Bobcat Club.

Prior to Ohio University, Bollig attended the University of Kansas where he earned his Bachelor of Science in Business Administration in May of 2019. While a student at KU, Bollig was a member of the Business Honors and Business Leadership programs. He was also an active member of his fraternity, Sigma Phi Epsilon, where he served as both Vice President of Scholarship and President. From 2016-2019, Bollig also worked for Kansas Athletics as a student assistant to Larry Hare—Assistant Athletic Director for Equipment Operations. In this role, he oversaw daily operations of the Athletics Department PepsiCo account and managed an extensive inventory of apparel for over 200 internal staff and volunteer workers.

Within the Ohio Bobcat Club, Bollig will serve as the point of contact for football parking and sideline experience opportunities, as well as the Rohr Room for men’s basketball. 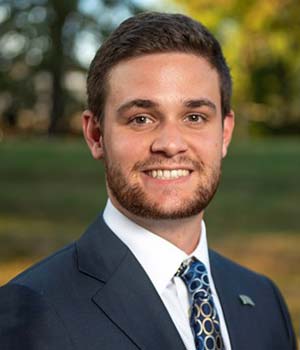 Steven LaPlante was named an Athletics Development Graduate Assistant for the Ohio Bobcat Club in May of 2020.

Steven will finish his MBA in June of 2020 and will graduate with a Masters in Sports Administration in May of 2021.

Before arriving in Athens, Steven worked in Group Sales for the Flying Squirrels, a minor league baseball team located in his hometown of Richmond, VA. The year Steven worked for the Squirrels; the team lead the Eastern League in Attendance for the 5th straight season. Among other roles, he worked closely with the Girl Scouts and Boy Scouts to have Scout themed nights and campouts during the season. Richmond also hosted the Eastern League All-star Week, and Steven worked to plan and coordinate events like the Home Run Derby.

Steven graduated from University of South Carolina in 2018, where he earned a Bachelor of Business Administration with a double major of Finance and Risk Management and minored in French. During his time in Columbia, South Carolina, Steven was a student scholarship manager for the men’s basketball team. After the run to the NCAA Final Four in 2017, Steven was named the head manager for his senior year.